The only active volcano in continental Europe

The Vesuvius, the only active volcano in continental Europe, is part of a large volcanic area that formed nearly 2 million years ago, during the tectonic phases connected with the Tyrrhenian Basin opening and the settlement of the Apennine range; the current shape of the volcano is a result of the constant succession of explosive and effusive eruptions in the last 25,000 years.

These events have partly destroyed Mount Somma, the most ancient volcano, inside which the Gran Cono of Vesuvius formed: this is the volcanic complex Somma - Vesuvius.

The Vesuvius has a typical frusto-conical shape, with its highest peak reaching 1,277 metres. The crater currently has a diameter of 450 metres and a depth of 300 metres. At the base of the crater and inside the caldera of Mount Somma there are several eruptive vents, from which ancient lava flows came out from 1631to the last eruption of 1944.

At the moment, there are small fumaroles on the Gran Cono of Vesuvius, a sign of its state of repose.

Mount Somma is 1,132 metres high at Punta Nasone and has a diameter at the base of nearly 15 km. It’s the most ancient volcano of the complex and was partly destroyed by the eruptive events in the last 25,000 years, during which the Gran Cono of Vesuvius formed.
Mount Somma is currently arc-shaped, open in the south, and surrounds the Gran Cono in the north. Its surface is furrowed by deep grooves called lagni, which reach even the lowest elevations, and a remarkably articulated and jagged ridge made of a series of summits called cognoli.

Mount Somma’s caldera, i.e. the crater formed by the volcanic activity, has a diameter at the base of nearly 15 km and contains the Gran Cono of Vesuvius, separated by Valle del Gigante, which is nowadays covered by the numerous lava flows produced during the last centuries.

Valle del Gigante is divided into Valle dell’Inferno on the east and Atrio del Cavallo on the west. The slopes of Mount Somma represent some of the wildest and most immaculate environments of the park: in particular, the extensive mesophilous woodlands, where chestnut trees, locust trees, birches, Italian maples and alders and a rich fauna can be found. 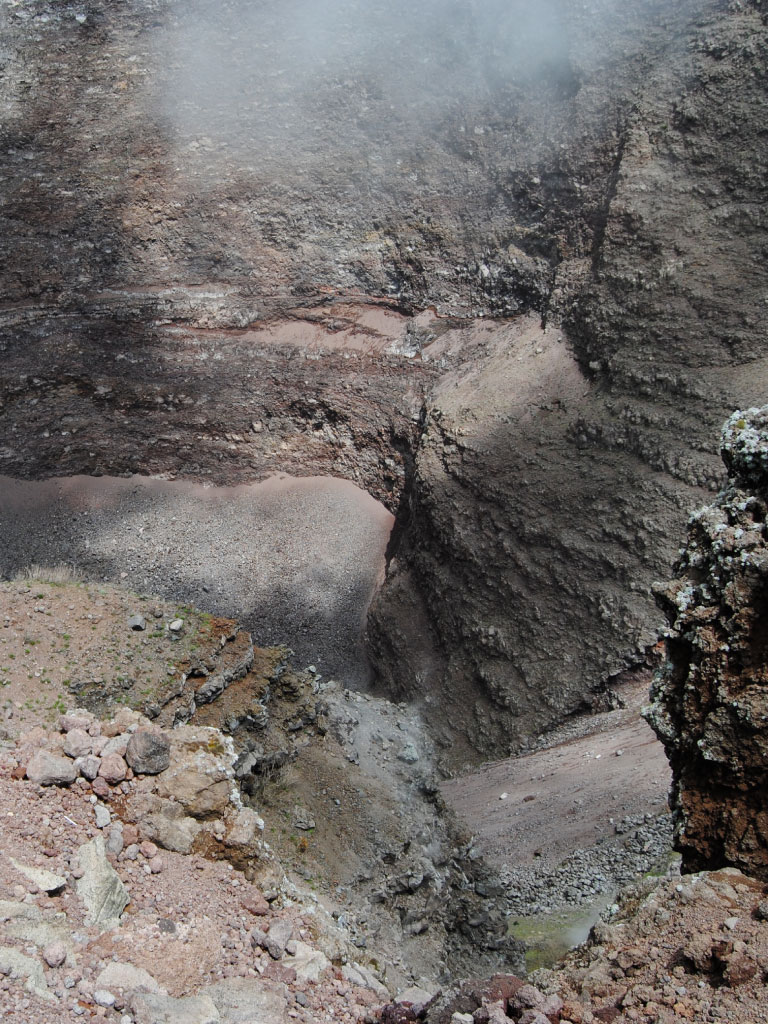 The volcanic activity of Somma-Vesuvius has manifested itself over time in various forms and with different intensities. The most evident and evoked manifestations are certainly the eruptions, i.e. the ejection of volcanic products from the central crater or from mouths and lateral fractures: depending on the characteristics of the magma, eruptions have different features, intensities and shapes.

“Effusive” eruptions, characterized by quite fluid magma with low gas content, generate lava that steadily flows onto the ground: this is the case of the last eruption of 1944, whose marks can still be found from Valle dell'Inferno up to the valley, near San Sebastiano al Vesuvio.

“Explosive” eruptions have a greater impact than effusive eruptions: the magma that reaches the surface is very viscous and rich in gas and leads to the expulsion of pumice, ashes, lapilli and fragments of the volcanic conduit, mixed with incandescent gases, which can also reach a long distance, causing massive destruction. Explosive eruptions, classified as “plinian” or “subplinian”, from the name of Pliny the Younger who first described the phenomenon, were for example those of 79 AD, which destroyed Pompeii, Herculaneum, Stabia and Oplonti, and that of 1631, which caused many victims and destroyed many residential areas at the foot of the volcano.

The Vesuvius is currently in a state of repose and its activity can be detected by the succession of numerous and imperceptible earthquakes and the presence of fumaroles inside the Gran Cono and along the slopes. It consists of the upwelling of water vapour towards the surface, originating from the combination of groundwater (magmatic and not) and hot material at a certain depth. 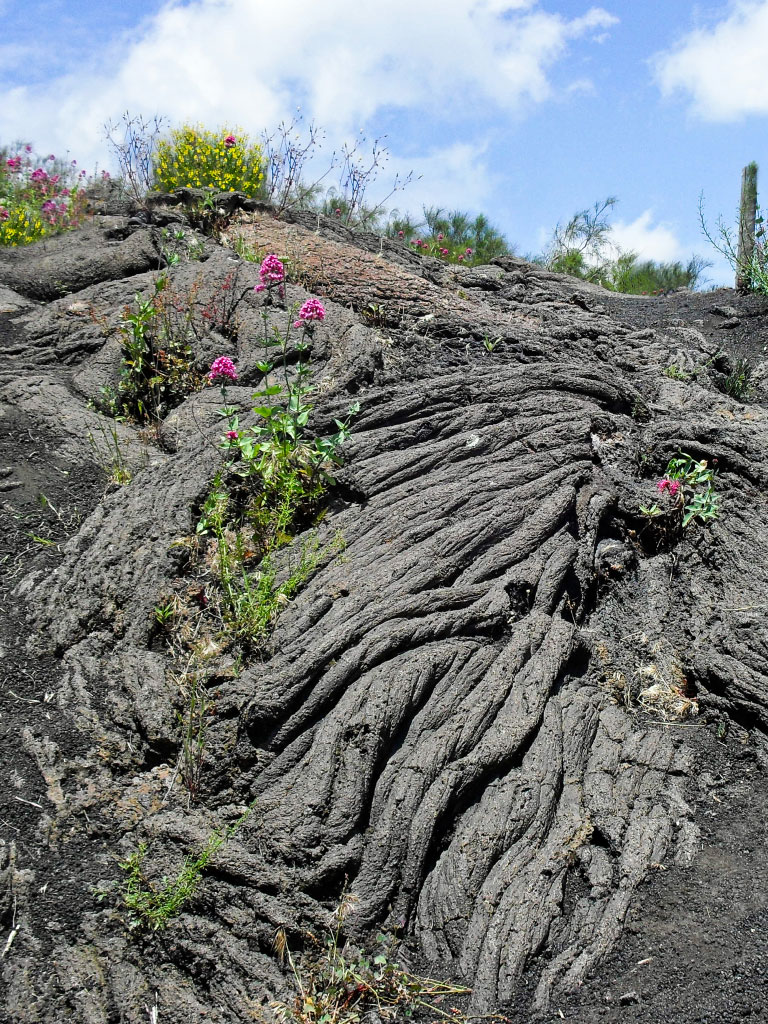 During the course of its eruptive history, the Vesuvius produced a huge amount of volcanic products, which can be distinguished into lava and pyroclastic sediments.

Lava: When the magma that reaches the surface has low content in gas and is quite fluid, effusive eruptions are generated and are characterized by the emission of lava that can flow up to distances of several kilometres and form different structures. Typical formations of the Vesuvius are the “scoriaceous” lava, with fragments that have an irregular and uneven surface; it’s also possible to find numerous formations of “Pahoehoe” lava, whose surface rapidly cools down and forms an outer layer which, still in the plastic state, is transported by the underlying magma, curling in folds.

Pyroclastic sediments: When the magma that reaches the surface is very viscous and rich in gas, explosive eruptions are generated. The products deriving from this type of activity are called “pyroclastites” and the sediments associated with it are called “pyroclastic sediments”. They consist of ashes, pumice, lapilli, bombs and fragments of the volcanic conduit and their thickness can vary from a few centimetres to a few metres, up to distances of a few kilometres from the volcano.

The biggest pyroclastic sediments produced by the eruptions of Mount Vesuvius can be found in the southern and south-eastern sectors in Herculaneum and between Terzigno and Boscoreale and can be traced back to the eruption of 79 AD, during which immense clouds of incandescent gas and ashes poured down the slopes of the volcano, thus reaching the residential areas of Herculaneum, Pompeii, Stabia and Oplonti. 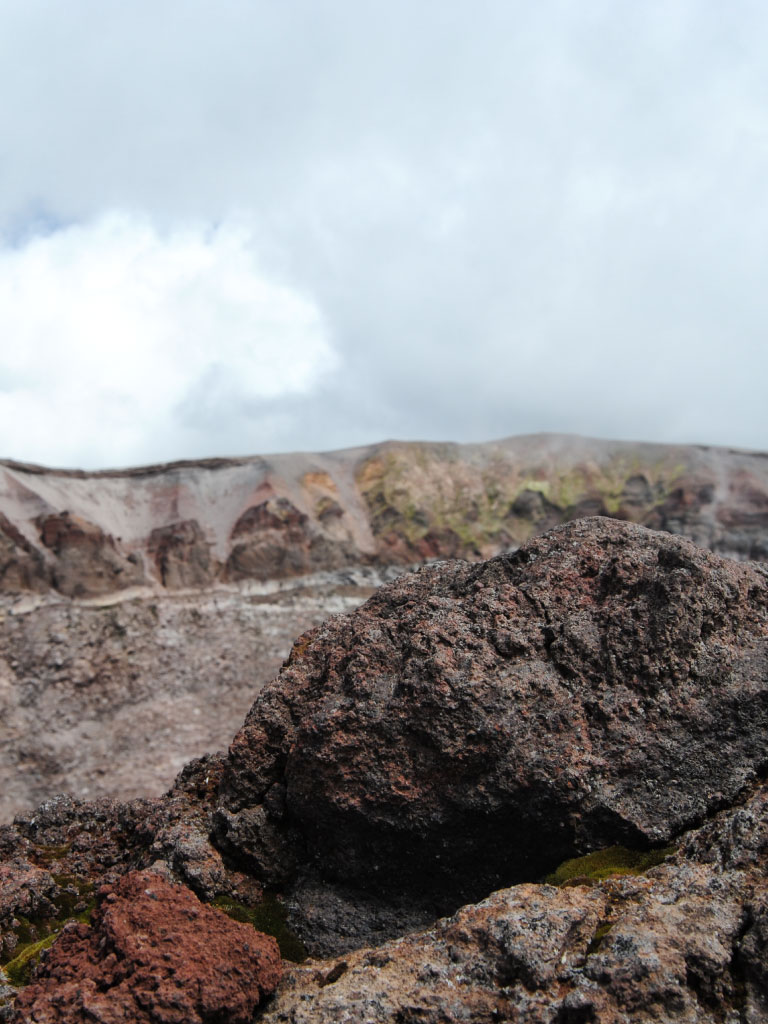 230 minerals have been classified in the Vesuvius National Park; 62 represent the typical areas of this volcano and 6 are still exclusive of the area: these data make the location one of the most interesting in the world.

The large quantity of minerals in the Somma-Vesuvius volcanic complex depends on the different formations of the minerals themselves, which originated from effusive and explosive eruptions or fumarolic activities.

Leucite: it abounds in the lava of Mount Vesuvius and Somma, easily recognizable inside lava flows, lapilli or volcanic bombs like specks of light colour (greyish white) made up of crystals of even large dimensions.