All the ecosystems in constant transformation

After an eruption, when the lava has cooled and consolidated, the substrate appears completely devoid of vegetation and humus; yet today, observing the Somma-Vesuvius, you cannot help but look at the many areas covered in blooming vegetation, a combination of Maquis shrubland and forest formations.

How can arid areas transform into complex and diversified ecosystems, you may ask?

The answer can be found in a natural phenomenon, known as “ecological succession”. All the ecosystems are in continuous transformation: the animal and vegetable communities follow one another over time, adapting themselves to the environmental conditions that change over time; some species disappear and are replaced by new ones. 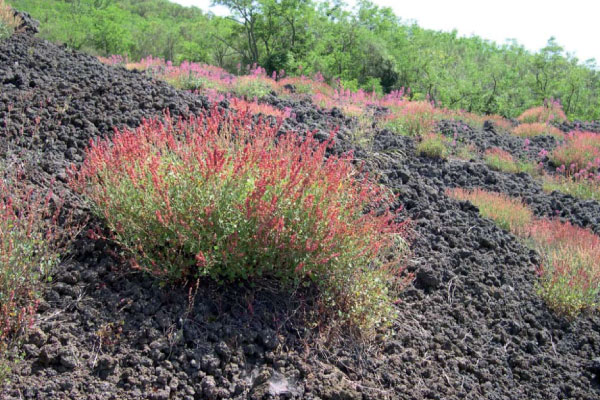 The organisms that are able to start the colonization process, succeeding, in the case of a volcano, to colonize the unwelcoming lava are generally not very evolved, very resistant and able to modify the substratum, making it more suitable for other species, which progressively settle and in turn determine further environmental changes.

Thanks to their ability to adapt, the first colonizers are called “pioneer species”, and are mainly represented by lichens and moss.

After an eruption, the pioneer species start to colonize the lava layer and form an organic substrate on which the simplest ferns and graminaceous plants begin to develop and in turn produce the organic matter that is necessary for the colonization of the soil by shrubs and other plants with a well-developed root system.

The lava of the most recent Vesuvius eruptions (1944, 1929, 1906) are widely colonized by lichens, which are capable of settling on the bare rock and disintegrating it with acid exudates.

The dominant lichen of the Somma-Vesuvius lava is certainly the Stereocaulon vesuvianum, with a typical grey and stringy appearance, which can be found on the most ancient lava flows along with the pioneering shrub species, including the Red Valeriana (Centranthus ruber), Helichrysum litoreum, Cistus (Cistus sp.), Artemisia (Artemisia campestris) and a rich variety of graminaceous plants.

In turn, these plants prepare the soil for the typical broom thickets, consisting of the Spanish broom (Spartium junceum), the Scotch broom (Cytisus scoparius) and the Etna broom (Genista aetnensis) which, with their deep yellow flowers, give the slopes of Vesuvius an appearance that is well-known to tourists. 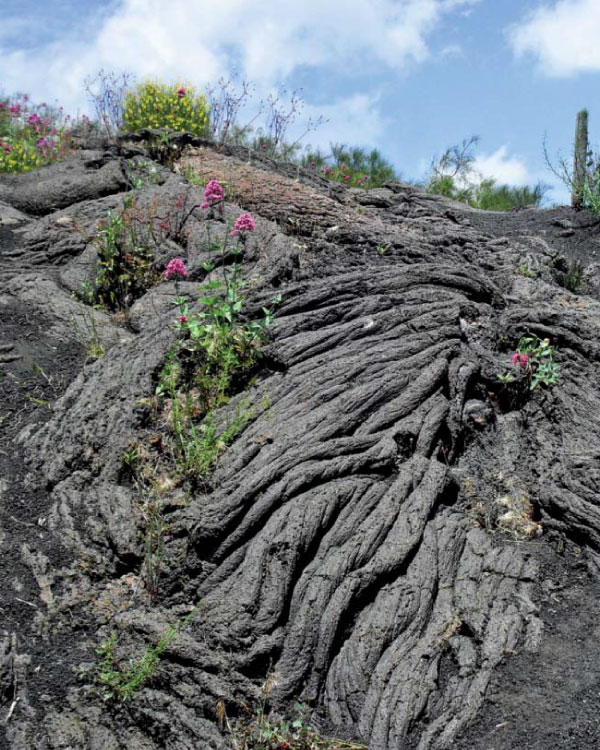 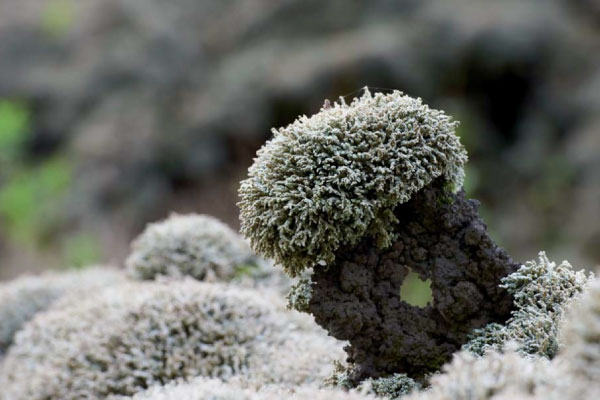 The best route for observing pioneer species is n.9 “Il fiume di lava” (the lava river), which quickly leads to one side of the lava flow of 1944, an excursion destination of great interest, but it’s easy to also find the Stereocaulon vesuvianum and the Red Valerian along Valle dell’Inferno and the Tirone - Alto Vesuvio Forest Reserve.

A view of rare beauty, also interesting for the observation of different stages of an ecological succession, is offered by route n. 3 “Monte Somma”, where, right after the entrance gate, you can see a lava flow, as well as broom thickets, pioneer species and holm oak forests.